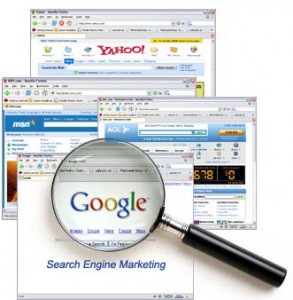 Usually, our primary goal as Internet marketers and online businesses is to drive traffic to our web site.  There are several tools for driving traffic, including banner ads, social media marketing, and offline advertising, but for most of us the most important component of getting found by qualified customers is via a search engine, such as Google, Yahoo, or Bing.

To generate search traffic, we need to build content around keyword phrases related to our products and build links to help us rank for those terms in the search engines.  We can also buy our way into the search results using pay per click advertising.  Either way, the first thing we need to do is identify the keyword phrases our customers are searching for, and because we only have so much time and money, we’d like to find the phrases that are the easiest and cheapest to rank highly for in the search results.

It’s a tall order, but there are a few tools and tricks that I’ve found helpful for finding keywords that we can compete for that generate traffic.  Here are eleven of my favorites:

What’s the story behind the Agents of Change Digital Marketing Conference?

For the past three years I had been running Social Media FTW, a conference on social media marketing with two partners of mine.

While it had been a great success, I always felt that social media is only part of the solution. Few businesses or organizations can survive on a steady diet of social media.

When people search for information online, they either Google it or ask their friends on Facebook. (Feel free to substitute your favorite search engine and social network.) Therefore, search and search engine optimization had to be part of any future conference.

In addition, more and more of us are carrying computers around in our pants or pocketbooks. Smart phones and even tablets are changing the way we seek out and gather information.

And it’s not just mobile websites. Mobile apps, QR codes, location-based apps like FourSquare…all of these are changing how businesses and organization interact with their customers. And so mobile would have to be part of the next conference.

Search, social & mobile. These were the three channels businesses and organizations would have to master if they wanted to survive and thrive in the coming years.

Where did the name come from?

I actually had a name I liked for another project I had been dreaming about that never got off the ground. However, a little research uncovered that the name had been used for several other conferences, including one by Microsoft.

I tucked that name away for another day…and another project.

Instead, I started with the word “accelerant,” which is how I had been describing social media. It didn’t sound right, though: Accelerant Conference? AccelerantWorld? South By Accelerant?

So an online thesaurus led me to catalyst. (The difference, in case you were wondering, between an accelerant vs. a catalyst is that while both may cause or accelerate a chemical change, the catalyst remains unchanged from the process. Now you know.)

Again, I didn’t like the way Catalyst  played with other words: The Catalyst Confab? Catalyst Expo?

Back to the thesaurus.

One of the synonyms of catalyst was “agent of change.”

Immediately I knew I had hit upon it.

I’ve always been something of a geek, so immediately I envisioned search, social and mobile as three agents…agents of change. Initially I had them pegged as a cross between Spy vs. Spy and Maxwell Smart, but I also imagined Alan Moore’s awesome League of Extraordinary Gentlemen.

Also, I knew I had to get my friend Josh Fisher on board. He’s a crazy-talented illustrator and designer, and an even bigger geek than me.

I knew he would get it, and he did.

The Mobile Agent was originally envisioned as a Max Smart like character using a shoe phone. My wife came up with that and I thought it was brilliant, although I love the jet pack wearing, Amelia Earhart inspired agent Josh ultimately created.

The Search Agent was originally more of a 19th century British hunter, inspired by the fictional version of Sir Richard Francis Burton from the steam punk novel The Strange Affair of Spring Heeled Jack, which Josh and I had both read. (Remember: geeks.) However, when I saw the agent, he reminded me too much of Scout, the mascot for Social Media Examiner, so we went with more of a Master and Commander sailor instead.

The Social Agent was the toughest. He started off as a Nick Fury inspired character, but I thought he was too anti-social looking. We then turned him into a friendly robot. Kind of a cross between Bender and Christopher Walken’s Continental character from SNL. Big fail.

So then we went back the original social agent, but tried to make him more friendly. So, I suggested we splice in some Billy Dee Williams. Voila!

Here they are? What do you think? Let us know in the comments below! 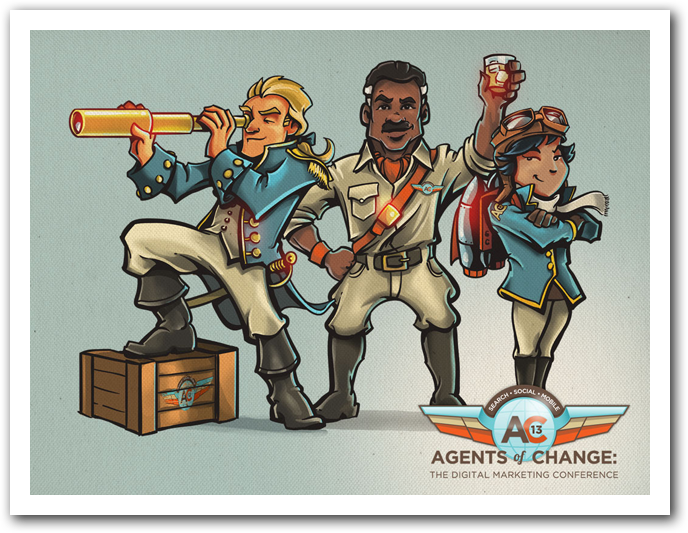