One of the things that Portland, Maine is most famous for is the amazing selection of restaurants. For foodies, Portland is definitely a top destination.

Which will explain why we had such a hard time whittling the list down…or updating it for 2016! We wanted to freshen this list up for the repeat AOC attendees! Below there are twenty options for dining while you are here for the Agents of Change Conference. Make sure you check out some of our faves! 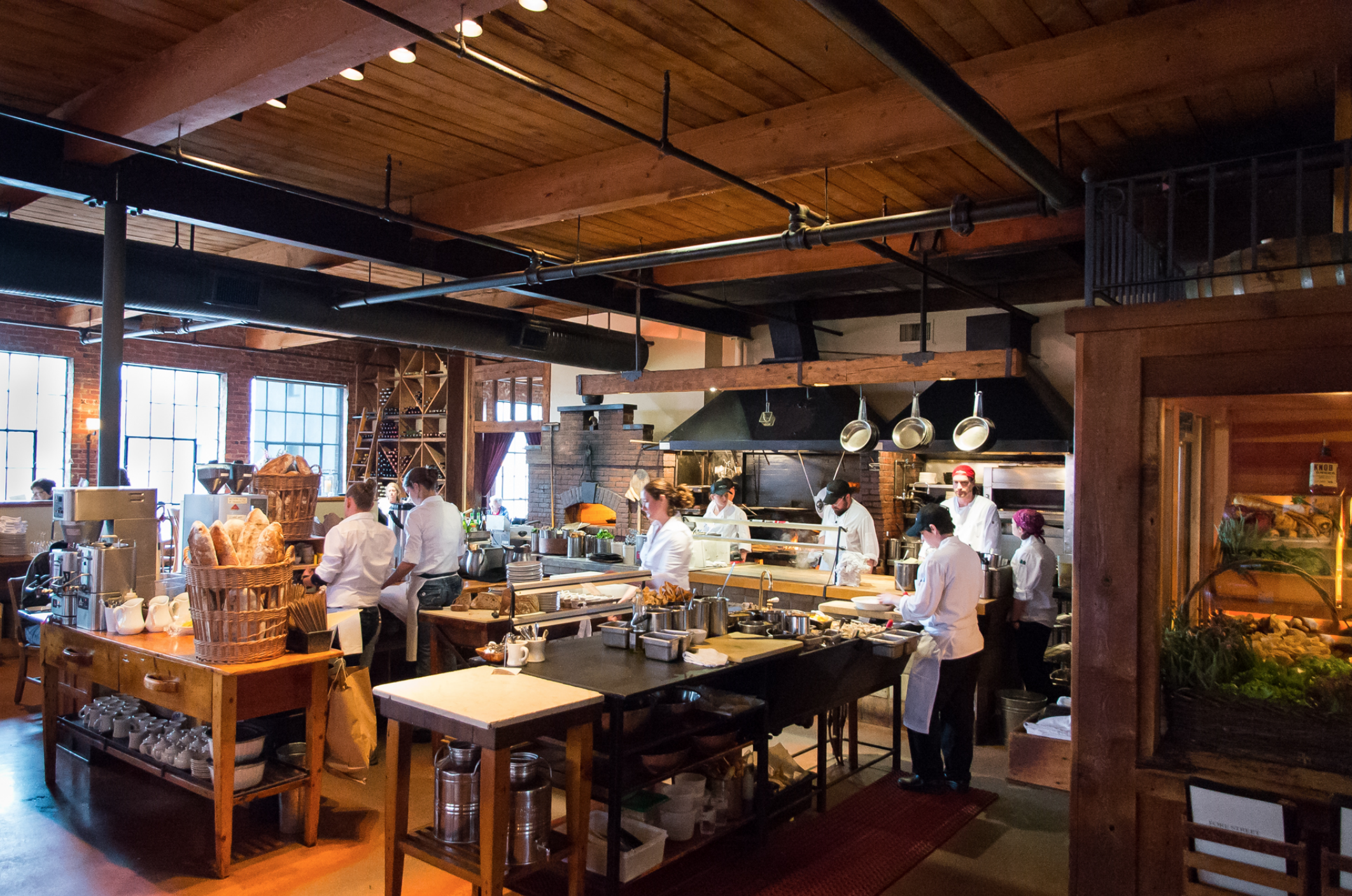 2. Local 188 – Where else can you mix great drinks, delicious food, and exquisite art? Local 188 has all of that covered under one roof. A restaurant area, lounge area, and a bar make all the foodie and art enthusiasts line up. Local 188 is a firm believer of the farm to table method, trying to incorporate all of Maine’s flavor in their dishes.
Our Recommendation: Seafood Paella

3. Eventide – The cool blue raw bar was an instant success, making its mark with a great granite trough of pristine oysters, inventive cocktails, and a menu that ranges from crudo and charcuterie to baked beans and biscuits. A revival of the great American oyster bar, Eventide offers pristine oysters and shellfish, the famed Brown Butter Lobster Roll, and a James Beard Award-winning take on classic New England fare.
Our Recommendation: Wellfleet Oysters and Whatever Just Came Off the Boat 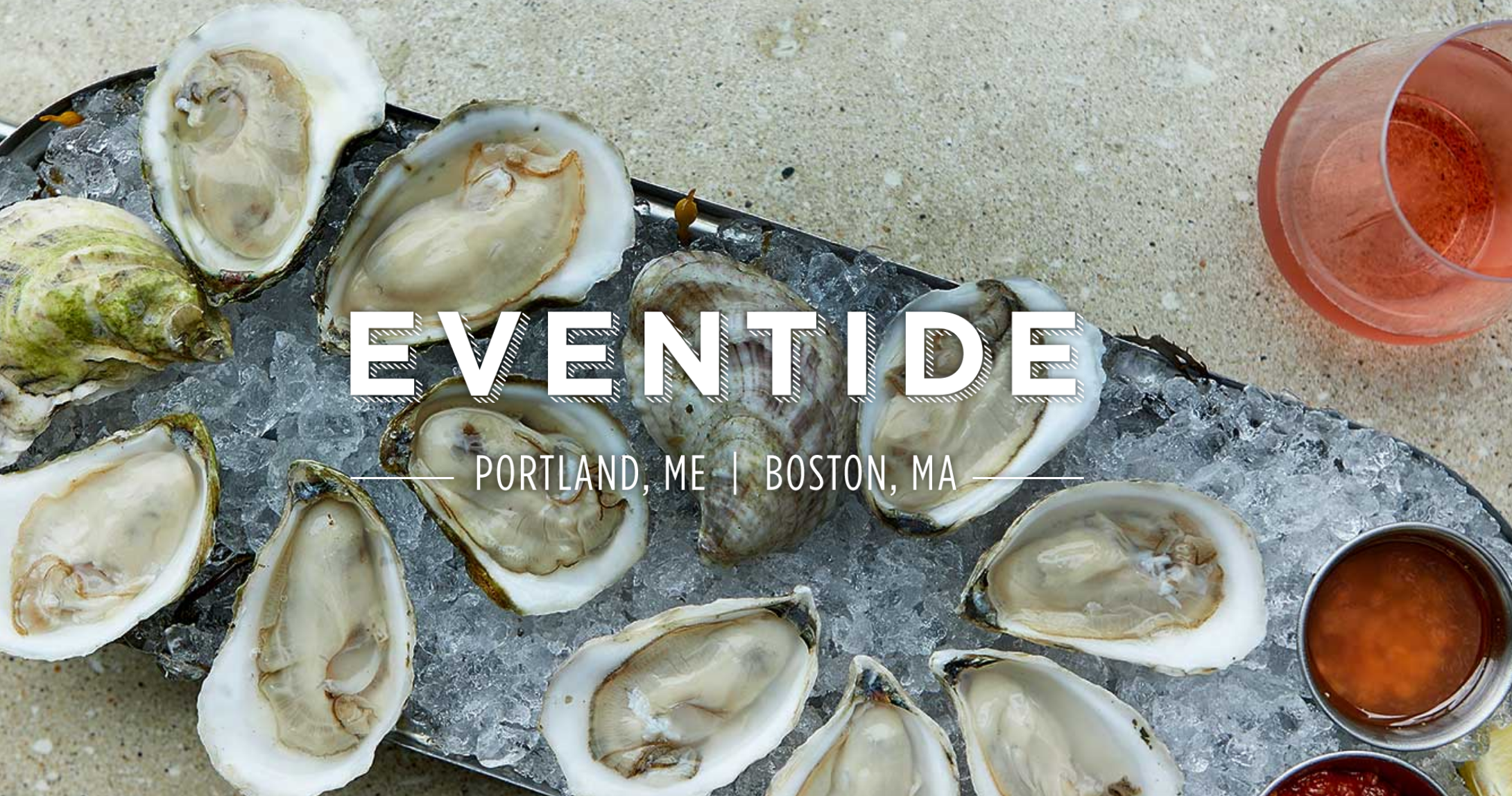 4. The Treehouse – Just outside of the Old Port in Deering Center, The Treehouse is located above Pat’s Meat Market. The top floor feel and the ambiance of the restaurant actually make you feel like you are inside a tree house. There are plenty of local beers to choose from as well of mixed drinks and wine. Their specialties are American, Greek, Mediterranean, Seafood, and Vegetarian.
Our Recommendation: Ravioli Crisps

5. Scales – Situated on the Maine Wharf, Scales offers a ton of fresh seafood as well as creative entrees they like to call “landfood”. Scales is owned by the same owners of Street and Co., Fore Street, and Standard Baking Co., which are all worth visiting.
Our Recommendation: Smoked Fish Chowder 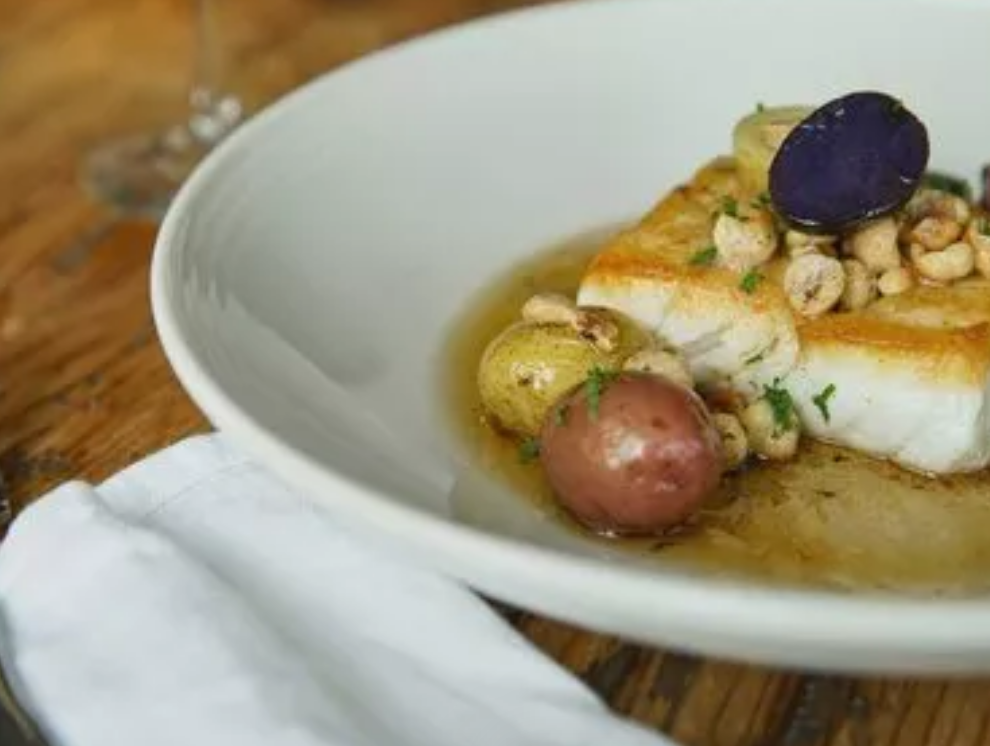 7. Anthony’s Italian Kitchen – Tucked away on Middle Street in Downtown Portland, Anthony’s doesn’t just offer an authentic 4th Generation Italian recipes from Naples, Italy but it also offers a show; with their show changes monthly. They also have a very affordable lunch, if you need to grab a quick bite to eat on the go!
Our Recommendation: Eggplant Parmesan

8. Chaval– The alluring crisp and chew of fresh warm baguette, inundated with crushed tomatoes, garlic and olive oil, eaten in tandem with a plate of salty, melt-in-your-mouth Jamon Iberico de Bellota and chased down with a sea of manzanilla sherry: These are the basic human needs that Chaval fulfills. It also provides the satisfaction of sliding your knife through panko-crusted Quail Cordon Bleu and revealing a molten stream of Gruyere and a copious amount of house-cured ham.
Our Recommendation: Bomba Calasparra Rice 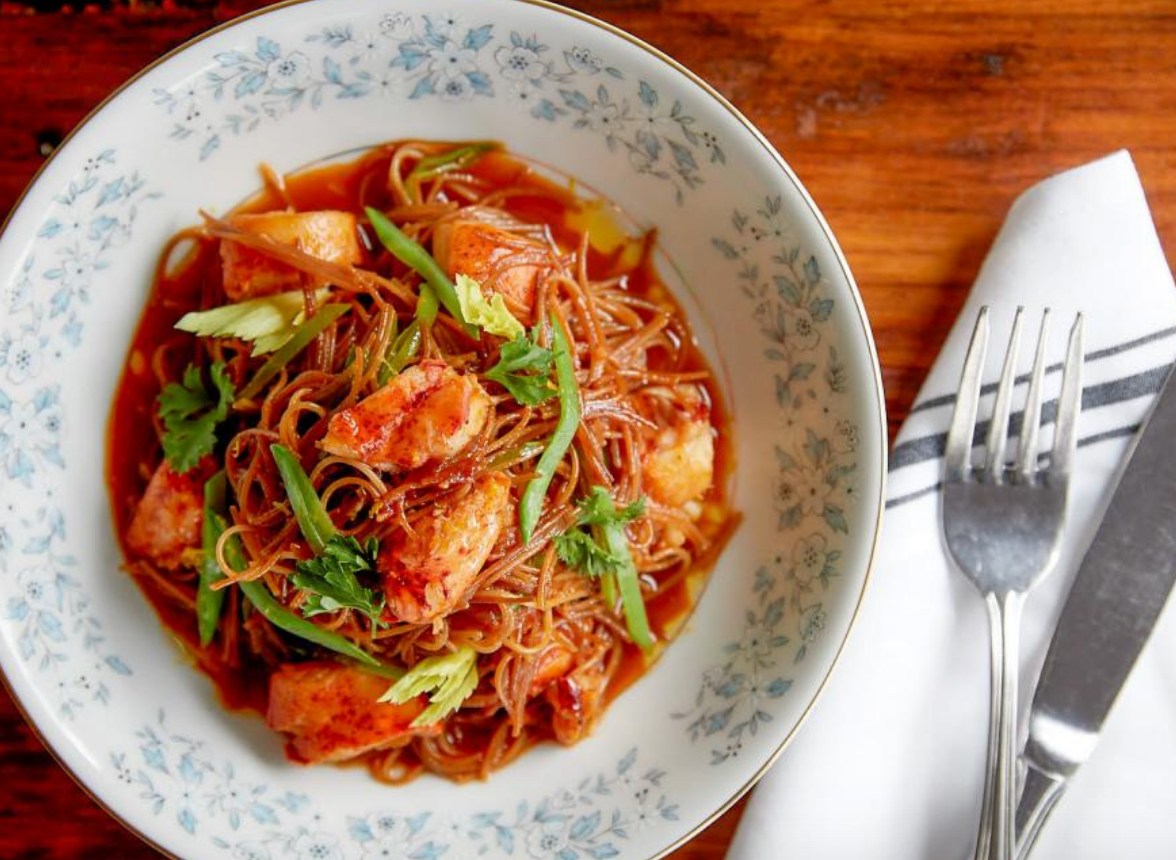 10. Isa Bistro – is an urban oasis of sorts, co-owned by husband-and-wife team Isaul Perez and Suzie St. Pierre. St. Pierre brings with her not only extensive front-of-house experience but also an impressive background in wine, while Perez impeccably combines training in French and Italian cookery with dishes inspired by his Mexican heritage. This means dishes like tagliatelle Bolognese, lobster tostada and their shaved-fennel salad with grapefruit, pecorino and mint.
Our Recommendation: Tagliatelle Bolognese

11. The Back Bay Grill – Chef-Owner Larry Matthews is revered among diners and colleagues alike, as there are few restaurants as iconic in Portland as The Back Bay Grill. Although the menu changes with the seasons, there are certain elements that always remain. Technique-driven dishes like the sausage-stuffed chicken leg and the grilled rack of lamb conjure up a lost era of supper club dining that befits the supple leather banquettes, and the level of service and hospitality here is second to none throughout the city.
Our Recommendation: Cast Iron Seared Local Scallops

12. Lolita Vinoteca + Asador – Lolita is a great Mediterranean restaurant with chalkboard menus, low lighting, and a long bar. Everything that comes off the wood-fired grill is great, as is the charcuterie cut with a hand-cranked slicer. If it’s nice out, try to get a seat on the front patio.
Our Recommendation: Fire Roasted Clams

13. Otto’s – Everywhere you turn, it seems like Otto’s pizza is popping up in Greater Portland whether it be a full-service restaurant or serving up their pizza in slice bars. Their fresh ingredients make their pizzas even more unique than their menu names. Otto’s strives to make their pizza as comforting and creative as possible.
Our Recommendation: The Masher

14. Slab – Slab pizza has been being consumed by patrons since 2014 but the recipe has been floating around Portland for a lot longer than that. There’s no way anyone could eat more that two slices of the slab!
Our Recommendation: The Hand Slab

15. Silly’s – Silly’s is a great restaurant situated on Washington Ave. The restaurant blends right in with the rest of houses and apartment buildings in the neighborhood. However, there is nothing similar about it if you are looking from the inside out. Their menu items have wacky names such as Chicky Chicky Bang Bang, Live and Let Fry, and Good Golly Miss Bolly. Did we mention that they have  dedicated fryers for vegan and gluten free entrees!
Our Recommendation: Fried Pickles

16. The Holy Donut – Although not dinner, who cares, cuz donuts! The doughnuts here are made with potatoes, which makes them a little denser than what you’re probably used to. There are almost two dozen options to choose from daily, from pomegranate to ginger to chocolate sea salt.
Our Recommendation: Maple Bacon

17. The Great Lost Bear – The Great Lost Bear or better known as the “Bear” or “GLB” to locals has been a go-to spot for years. Their menu has something for everyone in your party; from hearty, spicy junk food to a large vegetarian selection, from steaks, salads, and All American Burgers to award winning, wicked gooey desserts. We forgot to mention, they have 78 beers on tap with over 50 Craft Beers from the Northeast and 25 Maine Microbreweries!
Our Recommendation: The All American Cheesus

18. The Green Elephant – The Green Elephant is one of Portland’s vegetarian restaurants. The inspiration for their food began in Thailand and grew to include numerous Asian influences as they continuously sought to bring a spirit of equality and inclusiveness to their menu. They bring ingredients and flavors from Malaysia, Japan, China, India, and Thailand into a meat-free menu with something for everyone.
Our Recommendation: The Chocolate Orange Torte

19. Becky’s – “Becky’s Dinah Nothing Finah”. This very popular breakfast spot is all the rage every morning with locals and tourists alike. With crowds (usually the fisherman) lining up as early as 4am to get their great spread for breakfast. This place is pretty popular, Guy Fieri taped a portion of “Diners, Drive-Ins, and Dives” there!
Our Recommendation: The Lobster Omelet

20. Empire Chinese Kitchen – Maine’s first dim sum restaurant, located in the heart of Portland’s downtown on Congress Street. While Empire Chinese is anything but formal, it gets the combination of classic Cantonese and updated innovation just right. If you haven’t fully gorged on starters, move on to one of the large plates for added drama. The Lobster Longevity Noodles in tequila sauce is a sliced lobster that is wok fried with ginger and scallion and then put back together and served on a bed of wide noodles.
Our Recommendation: Lobster Fried Rice

Bramhall – When you first walk in and see the stained glass and lighting, it almost feels like you’re transported to a soiree taking place in a castle. Instead, you’ll get an amazing selection of beers and mixed drinks, an exquisite menu of high end food and various theme nights that include trivia and board games. Cash Only, no pictures, no wifi. 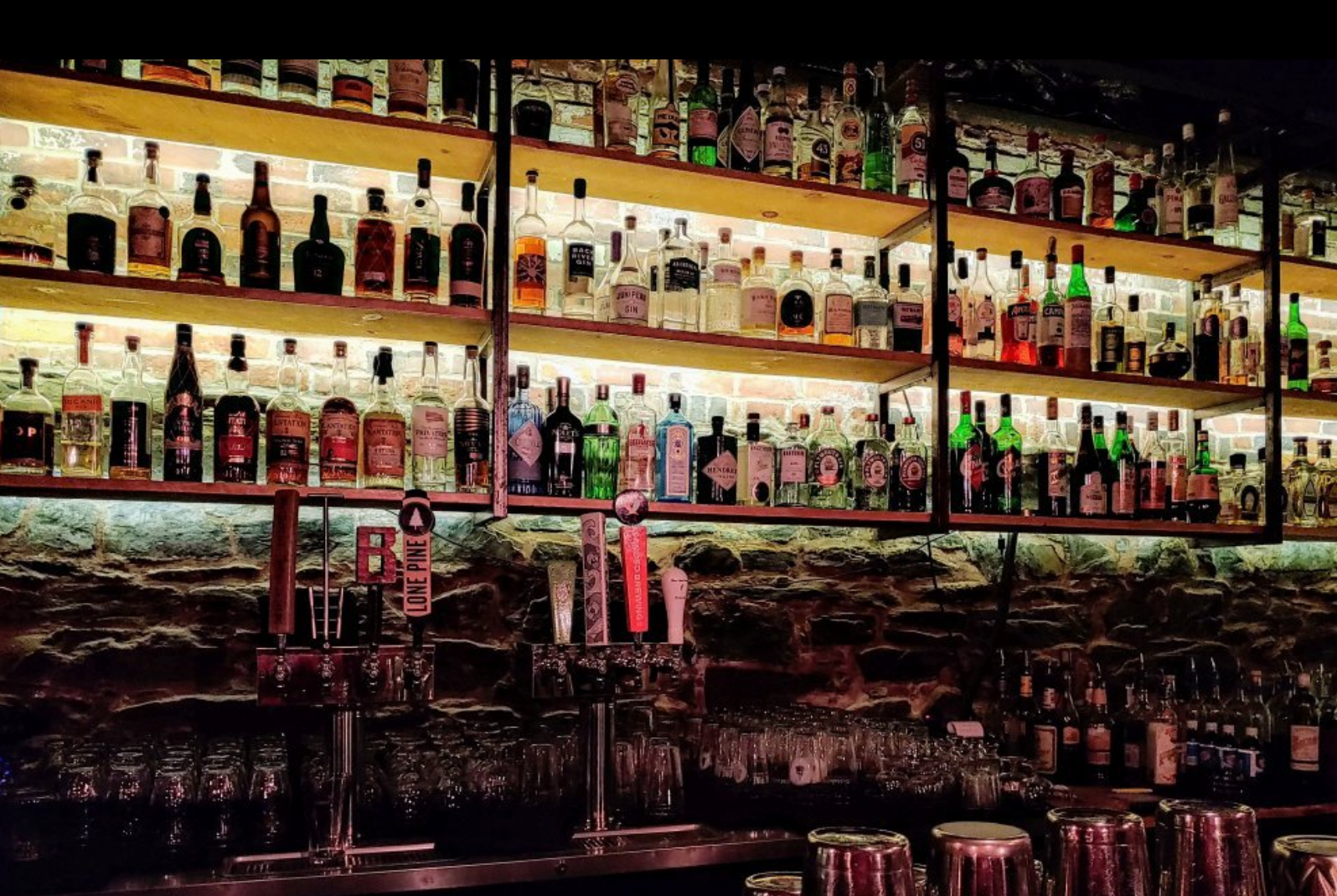 Maps – it has the kind of atmosphere that you’re drinking at your buddy’s homemade bar in his basement. Of course, your buddy would have to be really into geography and play all his music on records, but thats cool. Maps always has a rotating selection of some of Portland’s best craft beer and they also provide Portland, Maine with some of the best gourmet grilled cheese sandwiches you can find..

Lincolns may be Portland’s best spot to hide. You won’t find a street sign or neon lights leading you on a path to Lincolns. You just have to know where it is…or ask a local. Don’t pay any attention to their Facebook page, this bar isn’t in Kentucky. It’s the quintessential speak easy, with a relaxed atmosphere, terrific service and everything is just 5 bucks.

By offering just 20+3, we’re sure we just created a firestorm. Which one did we leave off that’s unforgivable? Show them a little love in the comments section!

The Chief Creative Officer of HBT Marketing, Harhut is known for her interesting and actionable insights that focus on applying behavioral science to marketing. A sought-after, top-ranked speaker, she’s wowed audiences in Moscow, Stockholm, Sao Paulo and all over the US — including attendees at SXSW.

Topic: How to Increase Recall, Response, and Revenue with Neuromarketing

However, if marketers strategically factor in the decision defaults people rely on, we increase our success. When our creative leverages the hardwired behaviors of customers and prospects, it can automatically increase the recall of our marketing messages, the response to them, and the revenue that results from them.

Discover how to apply the latest brain science findings from here and abroad to your marketing communications. Find out how to use the surprisingly powerful Von Restorff Effect, Availability Bias, Single Choice Aversion and more to trigger the behaviors you seek. See numerous examples from a variety of verticals. And leave this session ready to make your institution’s recall, response and ROI rates soar! 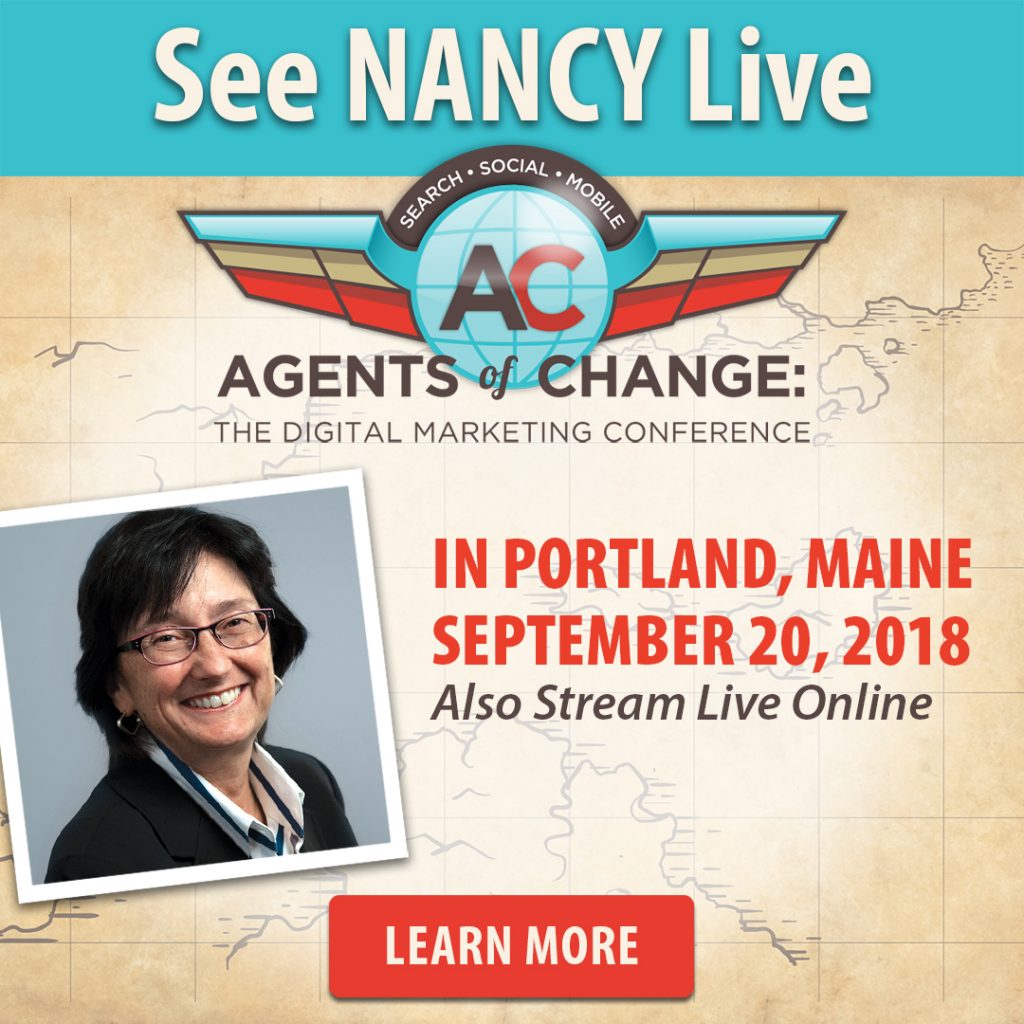 Want to register for the Agents of Change 2018 Conference?

Dorien Morin-van Dam is the owner of More In Media, located in sunny Myrtle Beach, South Carolina. She helps local small businesses with their social media strategy, planning, and execution. She is a regularly featured expert on CBS where she shares social media strategies and tips for businesses. Dorien is an international speaker and social media trainer and you’ll recognize her online and on-stage by her signature orange glasses, a nod to her Dutch heritage.

Topic: How to Market Your Local Business Without an Ad Budget

“You have to pay to play!” Local small business owners tend to hear this proclamation, and believe it; many shy away from social media marketing because they accept this statement to be true.

In this presentation, you will learn 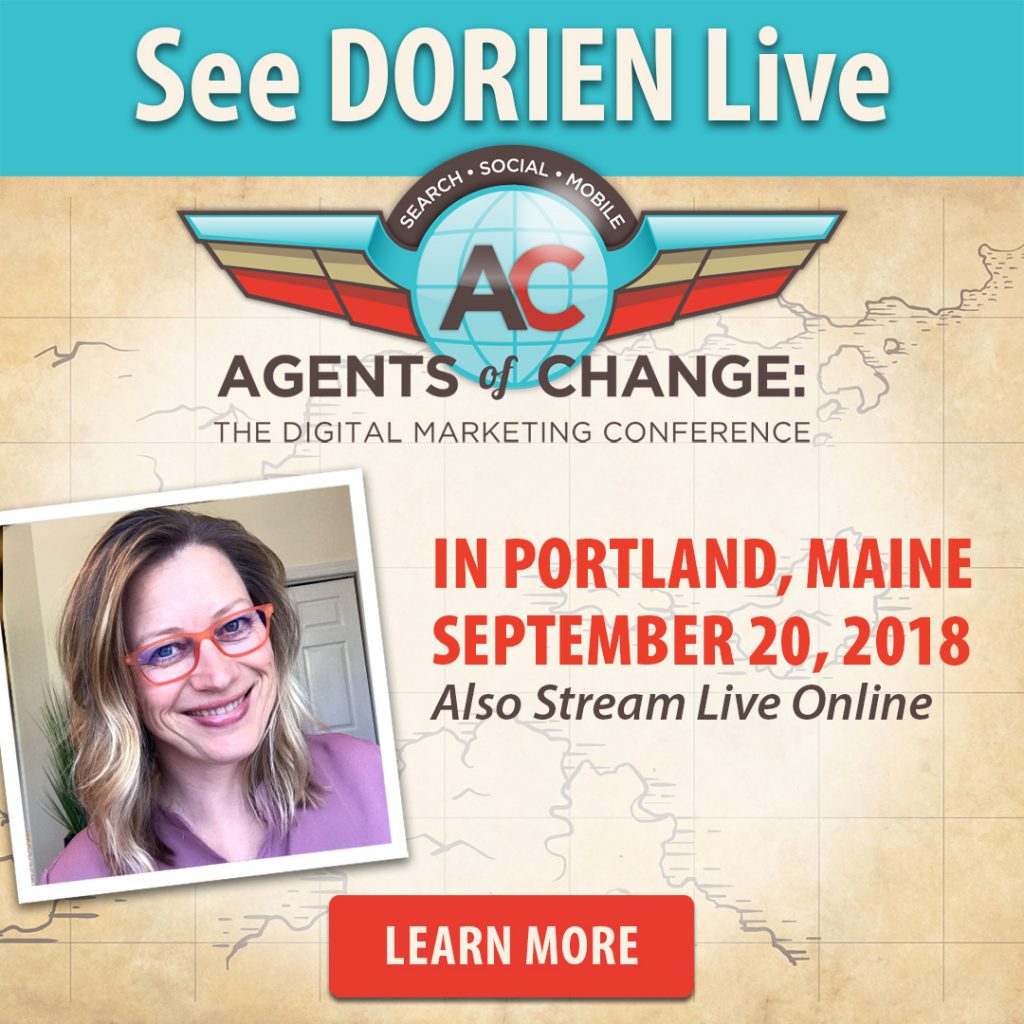 Want to register for the Agents of Change 2018 Conference?